“When Is the Last Time You Attempted Something Great?”

This is a very powerful question. I believe many of us avoid attempting great tasks to avoid experiencing great failure. There comes a time you have to ask yourself, “What is worse? Attempting something great and possibly failiing, or not attempting anything great at all and succeeding?”

Sadly, many people never really ever try to do something great simply because they don’t want to fail. I believe we are looking at success all wrong. Success is not reaching your goal without opposition, struggle, failures or setbacks. Success is reaching your goal, or getting closer to your goal, despite all of that. Success is also not just doing what you are good at. You can be successful in just trying. You can be more successful attempting success, even if you fall short of your goal. Your goal may be in trying alone. Let me explain…

The Success In Trying

Someone recently suggested my mom be in the Ms. Senior Pageant. She thought long and hard on it and decided it was time she step outside her box and do it. Her goal was not to win. Her goal was to get out of her comfort zone and to experience personal growth, as well as encourage the other ladies there. Her goal was to show up.

Her dress didn’t come in time but she didn’t stress (I admit I would have freaked!). She could have easily used that as an excuse to back out. She could have taken that as an omen, “well it’s just not mean to be”, but she didn’t. She pressed on. She was scheduled to be out of town for work a lot, and she could have used that as an excuse for poor timing, but she found a way to fit it all in. She had never done a pageant before and struggled with the perception of being in a “beauty pageant” but she focused on what good could come out of instead. She had plenty of really good excuses but decided to not use one of them.

Just showing up for her was a big win. We were all so proud because we knew she was way out of her box. She was proud of herself. She said she would sit there at practice thinking “I can’t believe I’m doing this.” As I watched her on stage, I marveled at her bravery, knowing it wasn’t easy for her. I gleamed with pride and reflected on my own need to step outside my comfort zone. She not only did it – to her surprise, she won.

What If You Fail?

What if she failed? What if she didn’t even get to be a runner up? Would she really have failed? Absolutely not. She met some amazing ladies and she could celebrate the victory of stepping out of her box. The moment she said “Yes, I’ll do it” she succeeded. The moment she stepped on stage, she was a winner because she attempted something great. She practiced and performed her song. She memorized her philosophy. She learned how to walk, dance and prepare for such an event. She walked away with more experience, more confidence and more ways to encourage people. Whether she walked away with a crown on her head and a sash across her chest or not, she would have left a better person, a more fully developed person with one more great experience under her belt. Victory was inevitable. 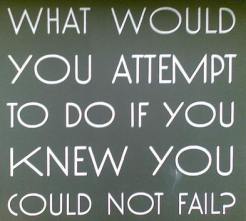 I want to challenge you today to try something great. Don’t just attempt to lose 20lbs, attempt to lose the full 50 you need to lose. Ladie,s don’t try to just get any man, aim to find the BEST and GREATEST man for you. Don’t settle for a job you are miserable, keep applying for the job you’ve always wanted. Don’t settle for an average marriage, work hard to develop a phenomenal marriage. In every single attempt, you will likely see much improvement whether you reach your desired goal or not.